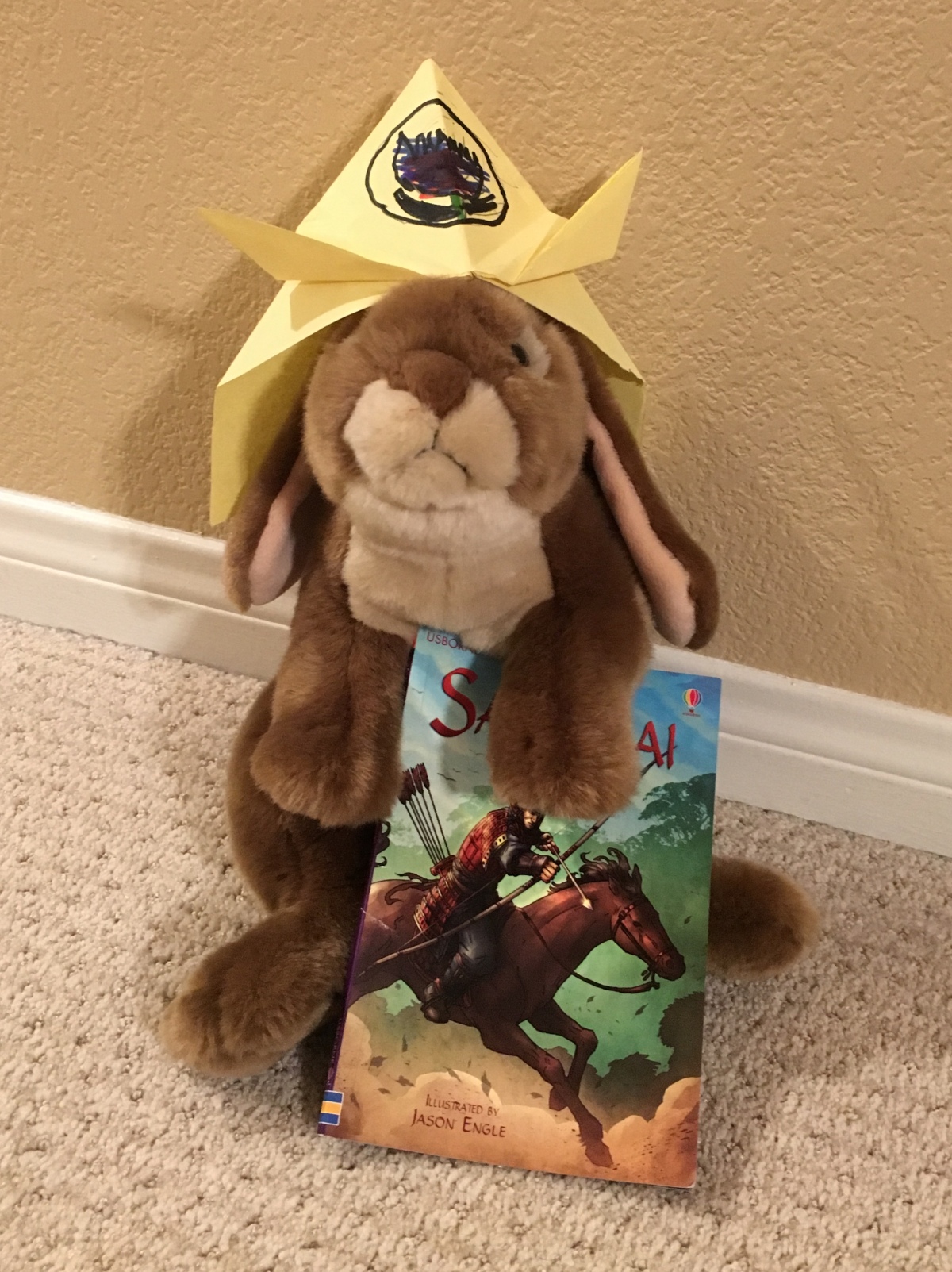 Caramel loves reading books about real things. In previous weeks he reviewed Knights and Castles (Magic Tree House Fact Tracker #2) by Will Osborne and Mary Pope Osborne and The Complete Guide to Dinosaurs and Prehistoric Reptiles by Chris McNab. This week he shares his thoughts on another nonfiction book: Samurai by Louie Stowell. As usual Sprinkles is taking notes and asking followup questions as needed.

Sprinkles: So Caramel, what is this book about?

Caramel: It’s about samurai of course!

S: But what is a samurai?

C: Samurai were the noble horseback warriors of old Japan. They fought with swords named katana, and bows and arrows. They had a code of honor called bushido. That means that they followed certain rules. For example, if a samurai was losing in a battle, he would not be captured alive. He used one of his special swords to kill himself. This was called seppuku or hara-kiri.

S: That sounds rough. What else did you learn from this book?

C: Samurai thought the cherry blossom was an important symbol, because at the height of its beauty it would fall to the ground to die. Samurai also had to be willing to sacrifice themselves before they got old. They saw the cherry blossom as a proof that this was the natural way of things.

S: That is kind of romantic. And cherry blossoms are really pretty,. aren’t they?

C: Yes, they are! They are called sakura! They are a very pale pink and they are really beautiful!

S: Did you learn anything else?

C: Yes. Samurai wrote poems and read a lot. They also liked the arts. Most samurai were men, though women of samurai families also learned to fight and some even went to battle.

S: Why are you always speaking of them in the past tense Caramel? Are there no samurai left now?

C: Not exactly. In 1873 the emperor of Japan decided to replace the samurai with a modern army. Today there are no samurai left in Japan but only their descendants.

S: That is a big word Caramel! Do you know what it means?

C: It means relatives and people who came after.

C: Samurai served clan lords, or a shogun, the military leader of Japan. The book tells stories of many wars of many samurai families. Many of them died.

S: So did you enjoy this book Caramel?

C: Yes. It was kind of violent though. Lots of people killing each other and themselves, and lots of death.

S: True. Hmm.. What else can we say about this book?

C: There are many pictures in the book. And this is a chapter book. It has seven chapters.

S: Do you have a favorite one?

C: Not really. But I have a least favorite one. The third chapter is called The Scarlet Sea. And it is about two clans of samurai fighting and the losing side dying. It is very sad.

S: Hmm.. let us end in a more upbeat tone. You also know how to make samurai helmets, right?

C: Yes! Just right for samurai bunnies! You can find some helpful directions here. And below is me wearing a samurai helmet I made!

This work is licensed under a Creative Commons Attribution-NonCommercial-NoDerivatives 4.0 International License.